Here’s How To Hire, Lead, and Fire or Promote With Less Stress

By Chelsea O'Brien
Posted March 25, 2016
In Managing Your Business, professional development
Here’s How To Hire, Lead, and Fire or Promote With Less Stress2016-03-252017-06-08https://www.fitnessmarketingmastery.com/wp-content/uploads/2019/11/fitness-marketing-mastery.pngFitness Professionals: Marketing Your Businesshttps://www.fitnessmarketingmastery.com/wp-content/uploads/2019/11/fitness-marketing-mastery.png200px200px
0
0

How To Make More Money and Keep Your Freedom, Time, and Energy?

Hello, my name is Debra and I’m a recovering The Profit addict.

My short term addiction only started a week ago yet I think I’ve been through an entire season this week doing “research” for a project. Actually, it’s not a bad addiction. Though last night one of the episodes (FitFuel – have you seen it?) about made me climb out of my skin. It hit too close to home about an overbearing, big muscled, big ego, big intimidation factor trainer who thought he was appealing to a target market of women… all of who would be offended, turned off and turned away by every aspect of his brand (him), his bold t-shirts featuring a huge bicep and gas tank image, in black and bold. Then he went on to use sexy female fitness models on a busy corner in beach city.

All wrong and mis-firing. If you want to appeal to women (and I think we can agree that we all do – 80% of people who buy training are women…or the men who are supported by women to do it) you think and ask what women want, what they hate, and if you yourself are intimidating to them and promoting something they despise… Siri better reroute you fast! 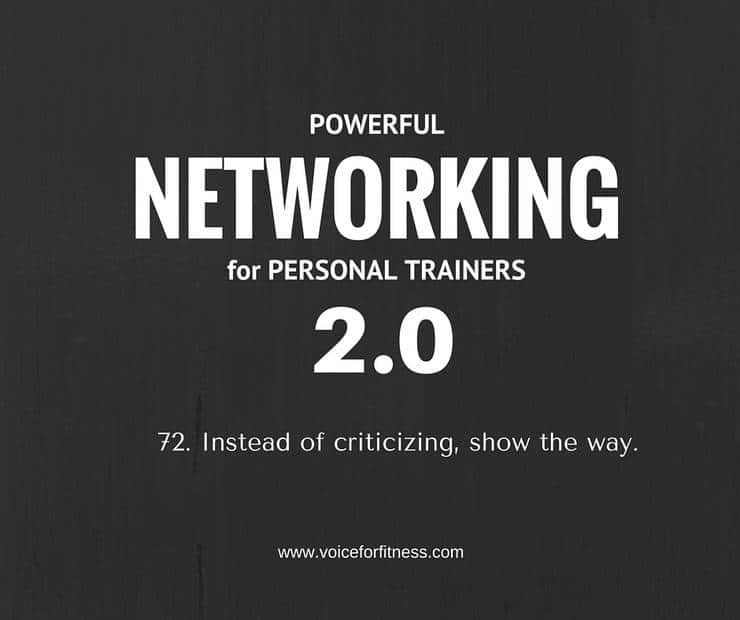 That’s just the tip of the iceberg.

What the owner did in this business – from A to Z was wrong. He had no idea of his financials. He had no idea of the appearance and importance of it for his customers. He had never tested and listened to feedback of his customers. When they quit, he just moved on to get more “traffic.” Listening to why people quit and what they hate about your product or are disappointed in can help you get it right.

It’s data, information; not failure. Unless you don’t listen.

In videos… are you “like” them? Are you dressed and full of energy and optimism in a way they want to be you? If you’re trying to serve professionals, for instance, you want to be dressed in a professional way- albeit not a suit… but not a hooded sweatshirt that prevents them from seeing form. A professional is interested in details. There are thousands of free images, videos, and ebooks on line. Are you relatable?

Where it gets most important for you is with your employees. This guy in charge of the last episode I watched… never listened to his employees. He never made it clear what everyone’s role or job was or how important it was. He didn’t give quota or the tools to reach quota. He criticized his people in front of others after a job was done poorly  – without ever having told them clearly the expectations.

1. They do just as this manager/owner did and are overbearing, dominant, passive-egressive with a cheerleader facade that is empty behind without the benchmarks given before jobs and roles are assumed.

2. They are passive. They hire someone for a title (Personal Trainer) and never give direction, sales tools, marketing training, or a quota or help set goals.

In both cases there is going to be a lot of turnover. In #1 people don’t want to take that for long. In #2 a stand-offish leader who isn’t available and doesn’t teach and provide tools will have a very small percent of people succeed and the majority fail due to lack of leadership and they will also leave.

Set the goals. Everyone starts at zero. By week 8, here are the expectations: ________ amount of phone calls, __________amount of appointments/consultations, _________% of closing from those initial appointments, _____ thank yous and _______ followup system based on what happened (sale made/new customer; thinking about it/follow up with “great news” call; no sale nurture list)

You have people report.

It’s made clear as part of the job. It’s no different than – show up showered, in a uniform shirt, lock the client files, and other things that you make a part of your expectation.

Clear, defined roles, what you give and what you get are the first step in building a better team that allows you to delegate, get freedom to create new programs, products, and services. That is the role of a leader. Anyone can count sessions on a computer, that’s not a job of a highly paid leader. Fill the roles you can and save the most important work of serving the end customer better by training your employees about great programs.

That frees you and anyone up from unnecessary pressure and lets them see where they are or they are not filling the role you need them to fill.